A Story of Healing 42 Years After Fatal Hamilton Crash 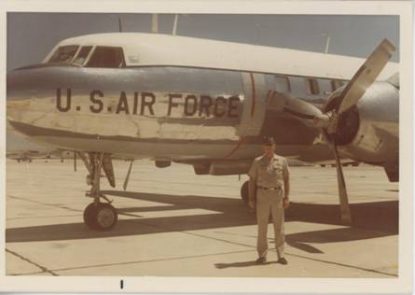 A son loses a dad but gains a heroic 'uncle' in the man who was the only survivor in a 1970 crash that killed 13 after it took off from Hamilton Air Force Base.

Daryl Robinson was only 9 years old when he lost his dad, the pilot in a tragic flight out of Hamilton Air Force Base in Novato. His father was Major Robert Robinson, the commanding officer at Almaden Air Force Station in the mountains just south of San Jose. Today Daryl Robinson cherishes the remaining memories he has of his father.

“Robbie,” as Major Robinson was called by his mother and friends, had flown thousands of hours in all sorts of aircraft on both combat and non-combat missions. He flew B-47 Stratojets as a senior pilot for the Strategic Air Command out of Plattsburgh AFB in New York. He flew C-47s and T-39s in Japan and completed more than 100 missions flying specially modified C-47s nicknamed Puff the Magic Dragon in close-cover assignments in Vietnam.

Robinson was awarded the Distinguished Flying Cross and Air Medal with five Oak Leaf Clusters for his service.

In August 1969, Major Robinson took command of the 682nd Radar Squadron at Almaden, a base that served as a big part of the countrys NORAD defense system.

As the son of the commanding officer, Daryl Robinson remembers having a little bit of status among the other kids at the station. Despite the standing and respect his dad deserved, Major Robinson was still just Robbie to everybody when he was off-duty. Those he commanded relished that easy-going quality and his good sense of humor. Daryl illustrates this in a story he wrote titled My Time On the Hill: An Air Force Brats Recollections.

Someone on base had a real taxidermy boar head, probably a memento of a great hunting expedition," he wrote. "Well, someone put that boar's head in the chair in front of the desk in dad's office and put his hat on it. Then they proceeded to take pictures of it with the nameplate in front of the head. I'm sure it was implying how stubborn and scary dad was as commander, but I could be wrong. Dad got a great laugh out of the stunt when he saw it. He had a wonderful sense of humor that way. He could laugh at himself without being embarrassed or threatened.

On Monday, May 4, 1970, shortly after 9 a.m. California time, four students were killed and nine others injured when the Ohio National Guard opened fire on protestors at Kent State University. The event would take the headlines later that day, but it was still morning on the West Coast when Major Robinson was making the 95-mile drive from Almaden AFS to Hamilton AFB in Novato.

The flight he was to pilot that day from Hamilton to Spokane, Wash., was just a routine trip that would give him some additional hours in maintaining his flight status. Daryl was later told that his father had expressed his desire not to become a desk jockey and that he wanted to continue flying.

Robinson was looking forward to retiring in a few months. He and his wife, Renee, had plans to settle their famly of four in Denver, where he would work for a commuter airline.

When he arrived at the Novato base, his aircraft was taxiing onto the runway. The plane stopped and another pilot on board the flight gave up the captains seat to Robinson.

Minutes later, a catastrophic structural failure of the windshield and cockpit area killed him instantly. The co-pilot fought for control of the aircraft, but it nosedived into a wooded area on the Davieu Ranch near Schellville.

There were 14 people aboard. Just one survived.

After the crash, Daryls family picked up and moved to Colorado as was the plan. There was no contact with any of the other victims' families as far as Daryl knows. They had long ago forgotten the name of the survivor, as he had not been expected to live.

But the survivor of that crash would become the catalyst for much healing to come.

On New Years Day 2010, Daryl was searching the Internet for more information about the crash. His father had been very much in his thoughts with the 40th anniversary of the crash fast approaching. Then he came upon the website of one Captain George Burk, surivor of the 1970 crash.

Burk had been burned on 65 percent of his body and was given a 10 percent change of survival. He had a broken back and fractured skull. He endured 36 surgeries over an 18-month period. Today he is a motivational speaker.

Daryl, who lives in Canon City, Colo., got in touch via e-mail with Burk, who lives in Scottsdale, Ariz. Then an hour-long phone call turned into a future invitation for Burk to come to Colorado Springs and give a keynote address for a conference that Daryl was planning. Burk agreed and Daryl got to spend four days with Burk and served as his chauffeur as he drove him from presentations at the city hall, a radio station and a church.

Captain Burk has been contacted by at least six family members of those who lost their dads in that crash, four of them since I contacted him last year," Daryl wrote " We call him 'Uncle George' and weve all been in contact with him and with each other.

Daryl says he considers his contact with Burk a blessing and a wonderful and healing aspect of a tragic accident.

To Daryl Robinson and many others, Captain George Burk is an inspirational hero. He is also a Vietnam combat vet, a trainer, an author, a motivational speaker, and now 42 years later, a survivor who is a healing presence to those who lost someone on that flight out of Hamilton on May 4, 1970.